There were fears a month ago that sterling could fall to its lowest level against the US dollar in its 200+ year history and despite reaching the depths of 1.1450, the lowest since June 1985, it still had some way to go to reach the all-time low of 1.05. Despite recovering to around 1.23 at the writing of this article, in order to get to parity we would need to see a further 20%+ fall, rivaling the 25% drop on Black Wednesday in 1992, when the UK was forced to withdraw from the European exchange-rate mechanism. 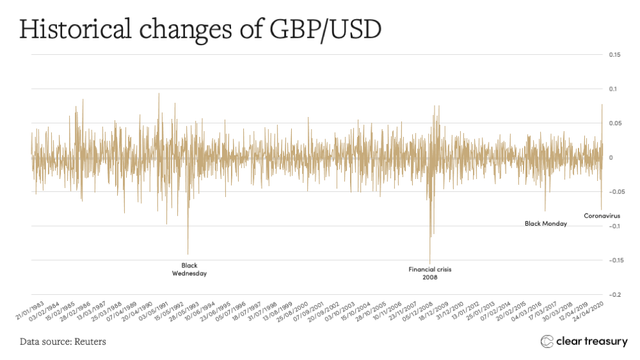 The oldest currency pair in the world

To give some history on the oldest currency pair in the world, for most of the 1800s, the average exchange rate was in and around the 5:1 level. Due to the economic damage and cost of the US civil war, GBP/USD peaked to an all-time high of 10:1, but the First World War acted as the first major tipping point for the rise in the dollar, seeing sterling depreciate to around 3½:1. The currency pair hasn’t always been a floating exchange rate either. In 1940, when the Second World War broke out, it was agreed between both governments to ease the heavy borrowing costs for Britain, that sterling should be fixed to the dollar at a rate $4.03. 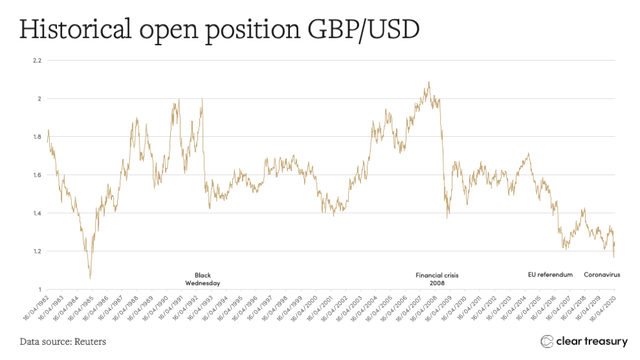 How low can we go?

The biggest question facing many investors and businesses is how the currency pair will perform throughout 2020. Whilst the dollar has been broadly weaker since the peak in economic fear over coronavirus, demand for the greenback will always remain strong whilst the global economy is in recovery mode and in a fragile state. For sterling, since Black Wednesday in 1992 and certainly since the 2008 recession, the pound has lost its safe-haven status so when a ‘risk off’ sentiment floods into financial markets, sterling is very unlikely to perform. With a no-deal Brexit scenario still possible at the end of this year and coronavirus having a detrimental impact on the global economy, not just the UK’s, it would be a surprise to see sterling go beyond the high of this year of 1.32.