Thinking about moving to Dubai? As the largest city in the United Arab Emirates (UAE), Dubai has an expat population of over 80% and a wide range of thriving international communities. 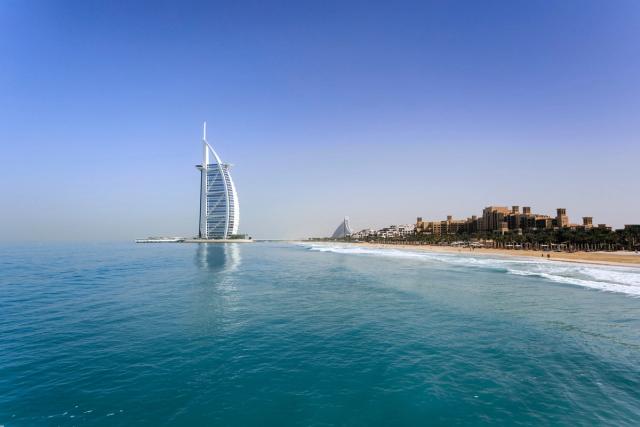 Living in Dubai has become synonymous with luxury and innovation. Many foreign workers flock to the city for its healthy career prospects, as well as lower taxes, premium healthcare and improved quality of life.

But before you start hunting for your new home, you need to be aware of the monthly cost of living in Dubai and the regular payments you’ll make once you’ve relocated. That’s why this guide is packed full of information on the average cost of living and the monthly expenses you’ll likely face in Dubai, using data from numbeo.com (15th June 2022) – a crowd-sourced global database of perceived consumer prices. We’ll explain the cost of living in Dubai for one person compared to a family of four, and what you can expect in terms of transport, schooling and medical insurance in Dubai.

The currency of Dubai

Now you’re clued up on how the city’s currency works, let’s dive into the cost of living in Dubai.

Is Dubai expensive to live in?

The cost of living in Dubai can vary depending on what you want to get out of your life as an expat.

Many UK residents are enticed by the Gulf Emirates’ promise of high salaries. The average monthly salary in Dubai after tax is £4,006.10, compared to the UK’s average of £2,259.54. You’ll be keeping more of your money in Dubai too, as you don’t have to pay tax on property, income or capital gains. As an added bonus, Dubai doesn’t charge VAT either. Keep this in mind when you look at the figures on the average monthly cost of living in Dubai.

Perhaps you’re wondering how life in Dubai compares to other overseas destinations?

Cost of living in Dubai vs Australia

When comparing Dubai and Sydney, the average cost of living is lower in Dubai:

Cost of living in Abu Dhabi vs Dubai

Aside from rental costs, Abu Dhabi is cheaper than Dubai:

Cost of living in Kuwait vs Dubai

Kuwait City, the capital of the State of Kuwait, also boasts lower prices than Dubai:

Consumer prices are 35.74% higher in Dubai than in Kuwait City (not including rent)

Cost of living in Oman vs Dubai

Oman borders the United Arab Emirates and its capital city, Muscat, is more affordable than Dubai:

Cost of living in Malaysia vs Dubai

If you head further afield to Malaysia, its capital city Kuala Lumpur, is significantly cheaper than Dubai:

Types of expenses in Dubai

Whether you envisage yourself in a modern skyscraper apartment, a cosy studio flat or a family home on the outskirts, the Dubai property market caters to various budgets. You’ll be pleased to hear that since 2021, Dubai has seen a consistent decline in rent and property prices.

If you’re looking to join a thriving expat community, you’ll feel right at home in areas such as Jumeirah Lakes Tower (JLT), Dubai Marina, Jumeirah Beach Residence (JBR) and Dubai's Old Town. These are on the more expensive side, whereas you can expect lower prices if you head out to suburban communities such as Dubai Silicon Oasis, Reem and Mirdif. Alternative cost-effective options include Dubai’s older districts of Al Nahda and Deira.

Take note if you plan on renting – landlords and rental agencies will often ask for the entire year's rent in one payment, as well as a security deposit. This may not be an issue if your place of work will cover the cost of your housing. But if not, expect to make a large upfront payment.

In Dubai, your electricity and water is facilitated by the Dubai Electricity and Water Authority (DEWA). You’ll likely have a higher DEWA bill in the summer due to increased use of your air conditioning. Planning on renting a villa with a private pool and garden? You can expect your utility bills to increase further. You’ll also notice  that the average broadband cost for Dubai is higher than in the UK.

Dubai is known for its scorching weather, and so to dodge the high temperatures, you’ll want to get around by car or public transportation. Petrol prices in Dubai are significantly cheaper than in the UK and many other areas of the world.

The city’s premium district JLT has two Dubai Metro stations, which also connects with a tram system. You can get a monthly travel pass to cover your transportation costs, which will only be slightly higher in comparison to a UK monthly travel pass. Your travel pass will enable you to get around easily, but your commute time will be longer as public transport doesn’t cater to every area in the city.

Another cost to consider for your potential overseas move is medical insurance, which is mandatory for both residents and expats. The city’s healthcare system is recognised for its high standards and private insurance in Dubai will give you quick and easy access when you need it.

According to tourism websites, you'd expect to pay just over £2,200 a year for comprehensive medical insurance. However, if you are being sponsored by the company you’re working for, they will be required to take our health insurance for you. Planning to move your family to Dubai too? You may find your employer offers health insurance for them as well.

Free government schooling is only available for Emirati nationals, so many expats send their children to one of 200+ private schools in Dubai. As the only emirate that has implemented annual tuition caps, Dubai has stopped its schools from increasing their rates at unreasonable amounts every year, however, private schooling in Dubai does still come at a cost.

Keep more of your money when you transfer with us

Now you know the average cost of living in Dubai, you’re ready to navigate the world of foreign exchange payments. We understand that converting large sums of money and transferring them overseas can be daunting and confusing. That’s why we use our expertise to cut through the jargon and help you save money when making international payments.

As part of Clear Currency’s friendly and personal service, you’ll get:

Take the first step towards your new life in Dubai. Sign up online or speak to one of our currency specialists today.